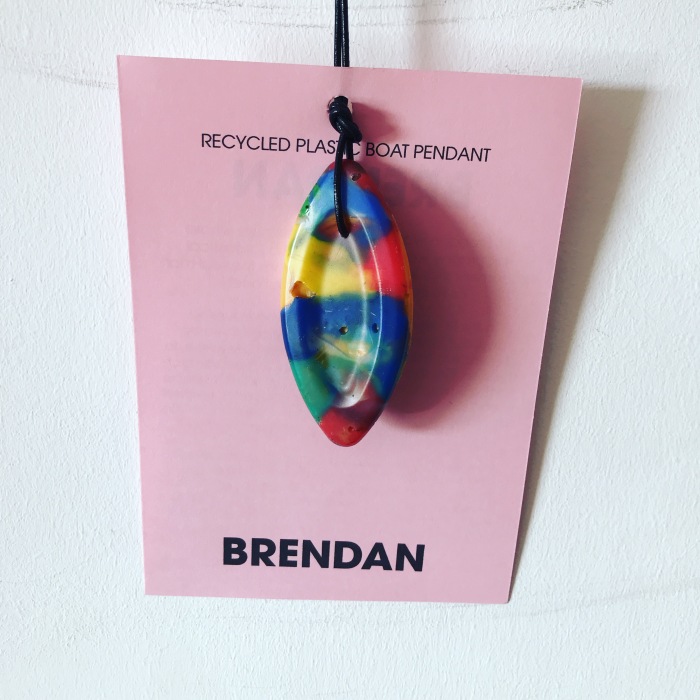 Brendan was an artists multiple in the form of a pendant made from recycled plastic. It was inspired by research conducted as part of the ‘more boats project’ and could be seen as a kind of devotional object. I wanted to make something that pilgrims with no destination could wear, a reminder of the value in the search for meaning. The material used – of course – creates a link with Doggerland a work itself explores the value of myth. I like the juxtoposition of the contemporary waste material with the middle-ages piousness of St. Brendan and his story. The Brendan reference is the fantastical, and the material of the pendant is – well – the material; the mundane. The pendant is about the two together, held in tension, and worn by a human being who embodies both.

St. Brendan was a real historical figure whose biography was mythologised in a fantastical document that is so far removed from the real man as to be rendered wholly fictional.

In life St. Brendan was a monk who travelled by boat to establish the first Christian monastic presence in the Hebrides and beyond. However, in the story Brendan’s voyage is imagined as a search for the Garden of Eden. Amongst his adventures he spends Easter on the back of a whale, sings vespers with fallen angels, sails to the edge of hell and offers council to Judas in punishment.

The tale of St. Brendan is a form of pilgrimage with no destination. It could be seen as an allegory for the search for meaning in the chaos of life. In this sense the voyage of St. Brendan, even in all its strange imagery, archaic world view, and obvious fallacy feels vital, meaningful, and strangely relatable.