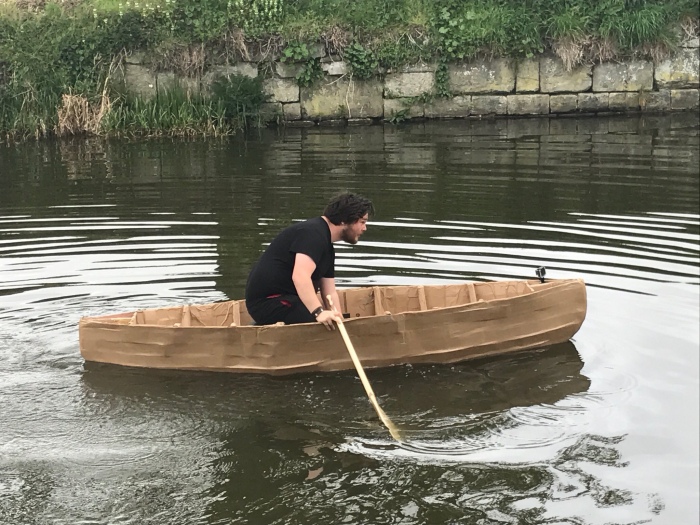 My 2018 work literally titled ‘BOAT’ was the catalyst for the current direction in my practice and my interest in using boats as a central part of my work.

Created for Normal? Festival of The Brain 2018 was a meditation on grief and the idea of loss. It involved designing, building and eventually piloting a 3m canoe made from cardboard. The act of using the canoe for its intended purpose eventually destroyed it, a metaphor for how we invest in aspects of our lives (and even how we invest in our own life) despite the inevitability of its eventual loss. I wanted to bring the points of creation and destruction into close proximity and examine what pushes us on and drives us to create in the face of the forces entropy. (Not that entropy is a force but you know what I mean, why do we build when separation is inevitable.)

Not only did I feel that the resultant video work was somewhat successful, but I also found myself profoundly affected by the lengthy process of building and attempting to remain somehow authentic to traditional boat building techniques whilst working with cardboard.

A few things struck me. Firstly, though the initial idea can be expressed almost as if it were a joke – a cardboard canoe. I found that by paying attention to the craftpersonship of the canoe I had tapped into a tone of authenticity and self-reflection my previous work has rarely possessed. The wryness was still there but gone were the metatextual nods and ironic detachment that had come to define the tone of my work up to that point. This was approach had a meaningful effect on how I view my practice and wish it to proceed, namely I will not be afraid of authenticity.

Secondly I was interested by how aptly a single occupancy vessel lends itself to a number of metaphors about life. This vessel that was roughly human size and shape that was made to carry a human load just as our body’s are made to carry a human consciousness and experiences across the sea of life seemed like a thread worth pulling… and so here we are pulling it.

There is so much I want to say about boats, their connection to our history as a species, and about what this work proposes to me that I find exciting and worth chasing, but to do so would leave me little to write elsewhere. I will trust that through continued work I might eventually be able to explain things more, that’s what the blog is for I guess?